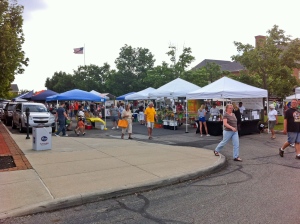 Our little community of New Albany, Ohio has a wonderful farmers market every Thursday afternoon during the summer. I’ve gotten quite spoiled being able to get grass-fed beef, chicken feet, pork tongues, local wildflower honey, vegetables, corn, and wonderful peaches from local farmers and have been awaiting its season opening, June 27th. I was delighted to find a new truck there on Thursday: a knife and tool sharpener! 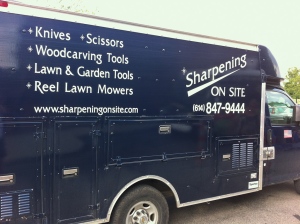 Any chef will tell you how important it is to have really good, sharp knives. I have a Chef’s Choice Diamond Hone Electric Knife Sharpener, but I put it away a couple of years ago and haven’t taken the time to find it. Meanwhile, my knives have been losing their edge. But also, my decades-old curved Cuisinart chopping blades have never been sharpened and they are noticeably duller than they were.

So I popped my head into the open rear door of the sharpening truck and asked the woman there – Rebecca Lyon – if she could sharpen a curved Cuisinart chopping blade. I told her it was not removable from its plastic hub and had been told by a knife sharpening service I had called on the west side of Columbus that they couldn’t sharpen it. She said she might, so I drove the 3/4 mile home, picked up the 2 chopping blades I have, and drove them back to show her. 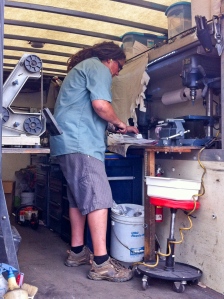 Rebecca took one look and said she could sharpen them. Using a small vertical belt sander – one of several machines she had on counters around the inside of her truck – she delicately hand guided the curved blade edges along the sanding belt a few times on each blade. Then she reached into one of the many storage drawers in her truck, pulled out a finishing stone, and deburred the back edges. I was impressed. I asked how much I owed her and she said it would be $5 for the two blades. When I asked her why it was so little she replied that I had been her first customer of the day. I told her I had more knives to be sharpened and she said she’d be back at the New Albany Farmers Market the 4th Thursday of every month. I told her I’d see her next month.

Recalling how dull my cooking knives had gotten, I decided I could be late to our little neighborhood cocktail party and gathered up some of my main kitchen knives and took them back for sharpening, rather than suffering for another month with dull knives. 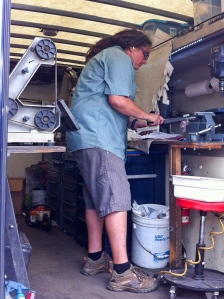 Rebecca got right to work, using a dual-headed blade sharpening machine. She made several passes with each blade and tested the sharpness by cutting a paper towel that she had folded over several times and sprayed with water. She adjusted the speed and separation of the sharpening discs as she sharpened each blade.

My chef’s knife was in pretty bad shape, with some dings in the edge and a blunted tip, having been dropped on the floor. She sharpened up the tip with the belt sander and took several more passes with the sharpening machine to get it into shape.

It took about 15 minutes for her to sharpen the 4 knives. When Rebecca told me it would be $13, I complained “What??! That’s too little!” She was a little startled. I told her I’d be back again next month so she could take care of more of my knives.

So here are my sharpened blades. They work beautifully. Nicely honed blades have a special feel to them: As they cut, they are much more precisely controllable, and hence, much safer to use!

If you’re in the Columbus area, do yourself a favor and get your knives, scissors, and tools sharpened! The Sharpening on Site website has a schedule of the various farmers markets and other sites at which they’ll appear. I’ll see you next month, Rebecca!