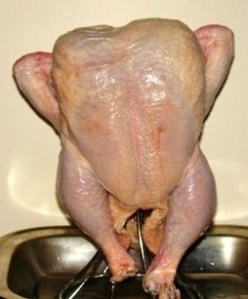 Brining is essential for a juicy, flavorful roast chicken. Brining is simple to do, and with a vertical chicken roaster and digital cooking thermometer with probe, roasting requires little work and is fairly foolproof. The result is so tasty, unless you don’t have time to do the brining or roasting, there’s no reason to ever buy a supermarket-roasted chicken again.

Dissolve the kosher salt and sugar in about 2 cups of boiling water. After thoroughly dissolved, add about 1 quart ice cubes with water to cool the hot brine. Stir in the crushed peppercorns and garlic.

Stand the chicken, vent side up, in a 1 gallon Ziploc freezer bag, in a tall stockpot. (I use an 8 qt. Calphalon stockpot; it makes the bagged chicken easier to handle, catches any overflow or leaked brine, and fits nicely in my refrigerator.) Pour the brine into the bag, aiming at the vent to concentrate the pepper and garlic inside the chicken. (If you wish, add the neck piece and gizzards; don’t brine the liver or heart – clean, lightly flour and gently pan fry these separately as a snack.) Zip the bag closed, squeezing out all the air, adding cold water, as needed, so the bag is completely filled with brine when zipped closed. (This will ensure all parts of the chicken are brined. Having put the bag in the pot, any overflow will be caught by the pot, preventing a mess.) Soak the chicken from 4 to 12 hours in the refrigerator.

Remove the chicken from the brine. Strain the brine through a fine sieve to preserve the pepper and garlic and put it into the cavity; discard the brine. Stand the chicken on a vertical chicken roaster on a small pan to catch the juices. Insert the neck piece and gizzards under a flap of the neck skin. (If you’d like a crisper skin on the roast chicken, pour boiling water over the chicken skin to firm it up and let the chicken air dry for about an hour before roasting.) Roast the chicken in a 350° oven until the thigh meat (away from the bone) reaches 175-180°. Remove from oven and let the roasted chicken rest at least 20 minutes before slicing. Reserve and de-fat the pan juices for making a sauce. Because of the brining, even the white meat will still be moist and it will all be very flavorful.

VARIATIONS. Add herbs, spices, soy sauce, or Japanese mirin to the brine. Use brown sugar, honey or molasses in place of the sugar (some sweetness tends to offset a saltiness the brine might otherwise impart). Use apple juice, cider, orange juice, beer, wine, rice wine vinegar, apple cider vinegar, stock, tea, or other liquids to replace some or all of the water.

The same method can be used for roast turkey (soak 1-2 days; use a jumbo 2 to 3 gallon freezer bag and vertical turkey roaster), roast pork loin, or pork chops. Also check out http://whatscookingamerica.net/Poultry/BriningPoultry.htm

Inspired by rave reviews in cooking shows and by my foodie friends, I had to try cooking Sous Vide. It’s a cooking technique where food is sealed in vacuum pouches and cooked a long time submerged in water at relatively low temperatures – the temperature at which the cooked food should end up. Made popular by famed chef Thomas Keller (The French Laundry, Per Se, and the recipes for the movie Ratatouille), the cooking method is often seen on Iron Chef America. I’ve tried cooking a few things so far and they’ve all come out wonderfully tender.

Keeping food within the narrow cooking temperature range required by this technique requires special equipment. I ordered a SousVide Supreme Demi from Bed Bath & Beyond through my local store (using a 20% off coupon, saving over $20 in handling costs rather than ordering online), which cost < $280 net and arrived less than 1 week after I ordered it. 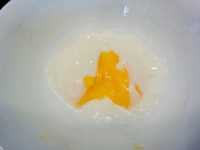 I immediately tried soft-boiled eggs, since my friend May Lee’s Facebook description of Onsen Tamago sounded so yummy. Easy to do: I just plunked a couple of raw eggs into the warm water after the machine brought the temperature up to the 146°F. I cooked them for about 1 hour. (While the cooking times are long, given the low cooking temperatures, the cooking times aren’t strict, since once the food is done, it can be kept at that temperature without harm.) The eggs came out as others have described: The yolks were custardy; the whites, somewhat runny (the yolks cook require a lower temperature to cook through).

I tried cooking salmon steaks next. This required sealing the salmon pieces in plastic bags and sucking out the air. (Air is an insulator that prevents the food from cooking properly.) Rather than spending $150 for the SousVide vacuum packing machine, I tried using 1 quart Ziploc Freezer Bags. Preparation was quick and simple. After seasoning the fish, I sucked the air out of the bags using a soda straw. I cooked it to between rare and medium rare – according to the cooking chart: 122°F for about 45 minutes. I usually eat salmon sashimi raw on the inside, just quickly grilled on the outside, to keep it from being cooked too dry. The medium rare sous vide salmon came out creamily moist and tender.

Next I experimented with chicken leg quarters. I tried a recipe for chicken with 40 cloves of garlic – reminded me of one of the first recipes I tried ages ago front the Galloping Gourmet, cooked in a Romertopf clay pot – here leaving the skin on, seasoning with salt, pepper, herbs, garlic, and olive oil. Cooked at 176°F for 6 hours, as recommended in the recipe. When it was done, the pouch had a lot of oil, making the preparation somewhat akin to a confit. Under the broiler to brown the skin after cooking. I was a little disappointed: The chicken was overcooked and I preferred the taste and texture of my various chicken curry and stew recipes. The 176° had made sense to me, since that’s the temperature I roast a whole chicken to. Now I see other recipes calling for cooking chicken legs at 140°. I’ll try that next time.

Then on to a rib eye steak. Like the salmon, I seasoned it simply with a little salt and pepper, sealed the bag, and let it cook at 127°F for 1 hour to a rare medium rare. As recommended, I quickly pan seared the steak after its sous vide treatment to provide a crusty brown outside. The uniformly cooked steak had a nice toothy texture, yet tender throughout. My leftover steak was even more impressive the next day served cold in thin slices.

Since the salmon, chicken, and ribeye were experiments, I had bought inexpensive supermarket fish and meats and didn’t bother taking pictures. My mistake! Despite their humble origin, the salmon and steak were fairly impressive in taste and appearance, worthy of showing.

Also, the Ziploc bags worked fine. With the chicken, partway through the cooking I saw a big air bubble in the bags causing them to float. I clearly hadn’t gotten all the air out. So I just unzipped the bag, used my straw, sucked out the air, resealed it, and let it go on cooking.

The experiments were fairly successful, so on to the next round. Since cooking sous vide results in food that is incredibly tender, I wanted to try it on short ribs of beef. More to come.